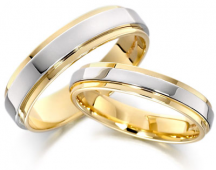 My wedding ring saved my finger. My wife’s played a part in saving her life.

Sometimes, lost in thought, I’ll catch myself absently twisting and turning it round and round. My best friend of 41-years-marriage made it herself. Cast from a simple circle of wax melted away in the white-hot heat of a furnace and replaced by molten gold, the ring got caught one day in the closing of a car door. I hollered – more for affect as it turned out once I discovered I wasn’t hurt – and from then on it’s been bent out of shape and won’t slip over the knuckle.

A needle in a haystack is a common way of referring to the search for something miniscule in a large space.

A needle in a compactor is how Tamara Swan, president of Citrus Park in Bonita Springs, referred to the hunt for a resident’s ring in the community’s garbage.

The resident, Nancy Gross, 57, was eating pistachios in bed Friday evening as she watched TV when she took off the diamond and sapphire ring her late husband designed for her 14 years ago, placing it on the nightstand.

“I put the shells on the nightstand, not realizing I buried my ring,” Gross said. The next morning, when she “swooped the shells into the garbage,” the ring went with it and eventually ended up at one of the park’s Dumpsters when she took out the trash. 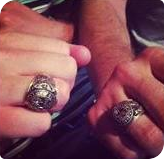 A good Samaritan lost his most prized possession - his Citadel ring - while helping to push cars out of the ice and snow in Buckhead during the storm.

UPDATE: The Atlanta Citadel club contacted 11Alive News Friday and revealed their plans to replace Zach's ring at no charge to him. When we broke the news to Zach, he was shocked. "Wow. Wow. I can't believe it, " he told 11Alive's Julie Wolfe. "That just really brightened my day." The Chandelier of Lost Earrings

We've all been there and lost that one special earring that is so near and dear to our hearts. Sagar and Campbell created The Chandelier of Lost Earrings with 3,500 single earrings, which were donated by those who had lost the other earring of the pair. The earrings collected span several generations; women donating items from their grandmothers as well as their daughters. Many of the donated earrings were accompanied with personal stories and memories that have become a part of the legacy of the finished piece.